The colorful, naive graphics of true vintage souvenir scarves and hankies are SO much fun!!  It’s wonderful to find one in silk, or any high quality vintage fabric like rayon or fine 100% cotton. 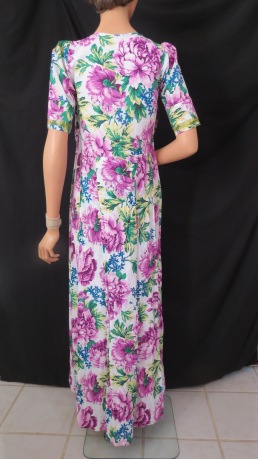 Isn’t this print gorgeous?  And, the cotton is super, super soft – probably due to age and washings as well as a high-quality fabric.

Another mystery for me!  Can’t date it exactly – there is no label and signs say that it was hand-tailored.  The style is not traditional Hawaiian, but certain details, such as the pleat in the back of the skirt and the fabulous material, make me think of other vintage gowns made there.

The colors are beautiful and the styling unusual, with a faux train detail back and front – falling from the bodice.  My first impression was that this dress may have been made in Hawaii, but I’m not sure.  There is no label and my impression is that it was made by an individual with tailoring expertise or at a small tailoring shop.

The fabric and construction details say true vintage to me, so I’m going with that.  Such a pretty design – it floats from just above the bust-line, swirling down to the hem, which is cut just a little longer in the back to make the dress fall properly.  This is a detail that is not often (if ever) seen in mainstream patterns that have been cut recently – one of the important styling elements that have gone by the wayside in modern times.  Surely true couture houses still observe them(?).

Although I much prefer Hawaiian garb from the 1940’s and 1950’s, I sometimes will pick up things from the ’60’s, and ’70’s, too.  The fabric used was still very nice  and the tailoring often exceptional.

Back then, Hawaiian apparel was almost exclusively made by small concerns who stuck to traditional designs and workmanship.  Also, the quality of cotton and rayon used was excellent.

This dress, though plain in the front, has a sweet detachable half-belt in back and two pleats fall from it like a faux train – a nod to traditional Hawaiian styling.  The skirt, also, is quite wide at the bottom and sweeps when you walk, giving a rather regal feeling . . . . . .

Nothing special about this dress, excepting that this maker is a respected label when it comes to more recently-made Hawaiian vintage.  However, the fabric is really nice – a rayon with a good hand, lovely colors and a great print.  Since it’s too big for me, I think I’ll be making some curtains for my bathroom with it!

From the 1960’s back to, maybe the 1920’s, these three are my oldest vintage examples of Hawaiian gowns.  From the farthest left, to right –

Psychedelic hues and patterns on the far left – not hard to see the late Sixties here.  The center dress is from the 1950’s and is fashioned in the traditional Hawaiian style, with a panel on the back that is almost like a train, without the dragging hem.

On the far right is a mystery dress with a metal side zipper. It has images in the print that are not your standard Hawaiian shirt variety and the fabric is very different –

instead of being the heavy cotton that I’d usually expect, it is a fluid material that I’d guess is rayon. If the label did not indicate that it was made in Hawaii, I’d say it had come from Japan.  The toggle closure at the neck is also something often seen on Chinese and Japanese garments. It’s also got a very 1930’s cut – close to the body.

Here are two more beauties from Hawaii.  The same fabulous construction and fabric, but slightly more modern art prints.  Don’t you love those colors?  Whenever I find one, I grab it!

Since I’ve started getting out the patio frock, here we go – – – – – – Nothing rivals the beautiful workmanship and fabulous fabric found in true vintage Hawaiian fashions from the early Seventies and before.  The colors are incomparable.  The cottons and rayons are practically indescribable.  Men’s shirts are also incredible.

Since at least the 1940’s, dresses made in Hawaii were very desirable for their quality and fit.  Some are exceptionally comfy and relaxed. Others are high-volume sexy or very chic.

What wonderful things I’m discovering!  Just LOVE the old kitchy motifs here.  Although there’s probably enough material to make a simple dress, the fabric is more the weight for upholstery so I’ll save it for sofa pillows or to cover a chair.

This nice shirt isn’t quite 20 years old, but I picked it up because of the styling and construction.  It’s by a reputable company, has a really nice print, quality rayon fabric, cap sleeves and covered buttons down the front with toggle closures.  Made to wear un-tucked.